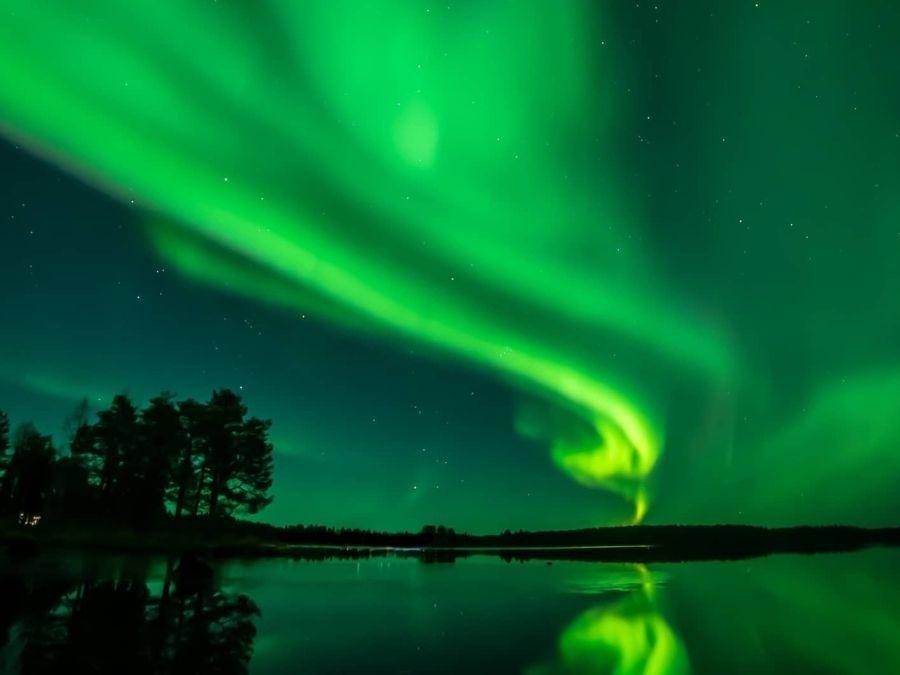 How aurora borealis are born and what do they mean?

Northern lights are created when electron particles emanating from the sun collide with the Earth’s atmosphere, where they cause a collision reaction together with oxygen and nitrogen atoms. As a result of the collision reaction, energy is released as light, which in turn appears on the earth’s surface as Aurora borealis. Northern lights are common in and near both polar regions of the earth. This is because the particles are most efficiently directed specifically to these areas under the control of the Earth’s magnetic field.

What is a solar wind?

Solar wind refers to the flow of particles from the crown of the sun that escapes away from the sun and towards the earth, among other things. The solar wind consists mainly of protons and electrons. A gas made up of such electrically charged particles is called a plasma.

Why doesn't the aurora borealis appear on the equator?

The reason why the northern lights do not appear evenly around the globe is due to the deviation of the geographical and magnetic axes, namely, the ovals move relative to the Earth. This drives particles drifting from the sun towards the earth specifically to the polar regions, where northern lights are also generated. Also, the times of day are not equal in terms of the occurrence of northern lights, as the best times to see the Aurora borealis usually is about two hours both sides of the midnight.

What time of year is the northern lights visible?

It is possible to see the aurora borealis from the end of August until the middle of April. Most northern lights occur in the autumn and early spring in March. These times are ideal due to the fact that during the spring and autumn equinoxes, the position of the earth allows for an optimal angle of impact of the solar wind on the earth’s magnetic circle.

When is the best time to see Aurora borealis in Finland?

Northern lights occur fairly evenly throughout the year, however, autumn and spring are slightly more active than winter and summer. By summer, the nights throughout Finland are too bright to detect northern lights in the bright sky. That is why the northern lights season ends around mid-April. About a couple of hours of the clock on either side of midnight is usually the most optimal time, but many northern lights graphers may use the best gap even for an entire night.

Can you see northern lights in the South Pole?

Although northern lights are generally known specifically as the phenomenon of the Arctic Circle, the same phenomenon also occurs in the South Pole. In addition to the Northern Lights, i.e. Aurora Borealis, the Aurora Australis of the southern hemisphere are also very beautiful at their best. In the case of the South Pole, however, the view of the northern lights is limited by the fact that there is no population equivalent in those areas as near the Arctic Circle. A good guide for seeing the Aurora Australis can be found on Australia website.

How do they call Aurora borealis in Southern polar circle?

Despite its mystical reputation, which is colored by many folk tales, the northern lights do not cause any harm or danger to people. The only “concrete output” that comes from the Northern Lights are the lights visible in the sky, but they do not in themselves have any harm in themselves, but are merely a mute light show provided by nature that can be enjoyed with complete care.

Can you see Aurora borealis in other places than Lapland?

In Finland, northern lights can be seen most in northern Lapland near the latitude of Lake Kilpisjärvi. However, northern lights occur throughout Finland. In the very southernmost part of Finland, around Helsinki, only one night a month is possible to detect northern lights in the light of statistics.

What is the most common form of Aurora borealis?

The most common of all northern lights is the so-called belted shape. They have a continuous or near-continuous lower edge and are generally spread in an east-west direction, extending from one horizon to another. Belted northern lights can occur as either homogeneous, radial, or stripy.

What color northern lights are most common?

Of the many colors of northern lights, the most common is green, which comes from oxygen molecules excited by electrons. The wavelength of the green color is 557.7 nm (nanometer, 10-9 m). Sometimes green northern lights can look yellow to the naked eye as well as to the camera, but it’s still the same green.

Check our other northern lights texts