Share on whatsapp
Share on facebook
Share on twitter
Share on linkedin
Share on email
Even though the summer months are drawing to a close in Ranua, our beautiful town is still showing its best sides as the autumn colors begin to adorn the abundant flora of our Finnish arctic wilderness. With just a few short weeks of summer remaining, we look forward to a change in the temperature and await the arrival of the new northern lights season here in Finnish Lapland. 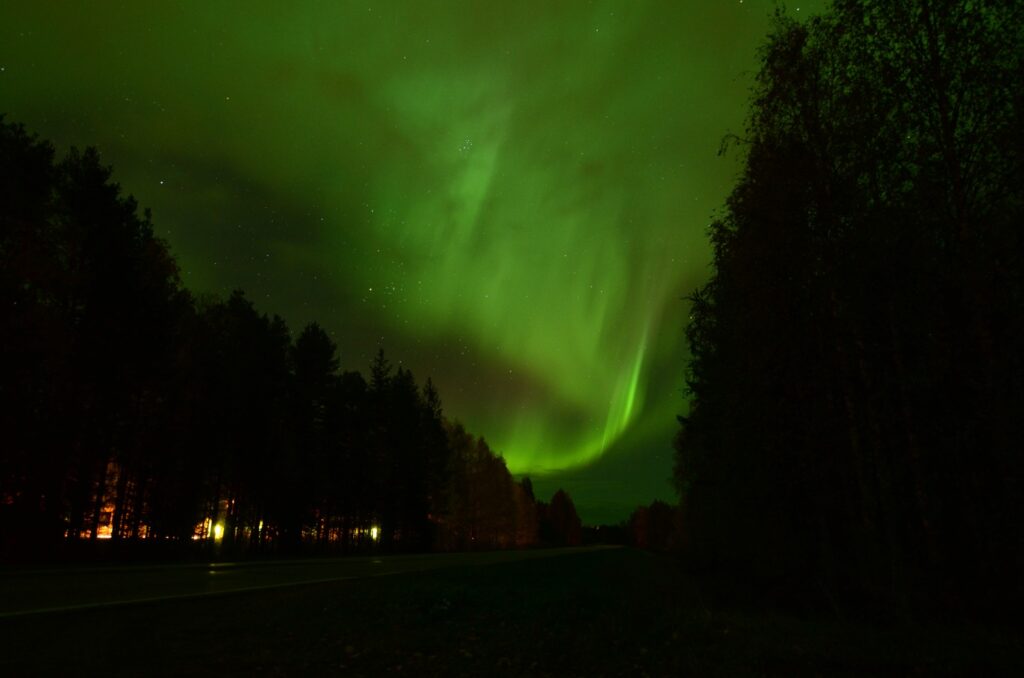 It is quite widely thought that the Northern Lights are only seen in Lapland during winter and spring seasons, but actually, this couldn’t be any further from the truth, as the colourful night sky and dancing arouras begin to light up the sky as early as August, and usually last until the beginning of April, when the lighter nights start to signal the beginning of the summer season, where the sun stays above the horizon marking the Summer Solstace.

September is one of the best months for Aurora borealis hunting

September is a month when we usually don’t have permanent snow here in Lapland, which means that the nights are actually going to be the darkest during the first month of autumn. This makes September one of the best months for aurora hunting in Lapland.

During September, the night temperatures are usually also more tolerable, which makes it easier both for the person and the photography equipment to last for longer times. During winter, the cold weather puts a lot of burden both to our bodies and to the batteries of our cameras, which can both see the photography sessions and northern lights hunting end earlier than we were hoping.

How are the northern lights born?

For those who are living close to the Arctic Circle, Northern lights are quite common sights in the night sky and some of us are even so used to them that we don’t anymore pay too much attention them. But what creates the Aurora borealis, how are they born?

The source of the Northern lights is our sun that is located about 93 million miles away from planet earth. The distance is very long and it protects us from the heat of the sun, but its effects do extend far beyond its visible surface. The roots of Auroras are located on the sun and sun storms that send strong gusts of charged solar particles through the space and towards planet Earth. If Earth is directly on the path of these particle streams, our planet’s magnetic field and atmosphere react to them when met.

When the charged particles from the sun hit molecules and atoms in Earth’s own atmosphere, they animate those particles, causing them to light up.

What does it mean for the particles to be animated? These particles consist of a central nucleus and a surrounding cloud of electrons encircling the nucleus in an orbit. When the charged particles from the sun hit Earth’s atmosphere, electrons move to higher-energy orbits, further away from the nucleus. And when an electron moves again to a lower-energy orbit, it releases a specific particle of light or photon.

What happens in an aurora is similar to what happens with the neon lights that we see on for example business signs. In these cases electricity is used to animate the atoms that lay in the neon gas within the glass tubes of a neon sign. That’s why these signs give off their brilliant colors. The aurora works on the same principle – but at a far more vast scale. This larger scale is able to light up large areas of the Northern sky, located close to the Arctic Circle.

The auroras are often seen as a curtain of light but they have the tendency to variate and sometimes you’ll see a hint of pink, and strong displays might also have red, violet and white colors.

It’s fair to say that nowadays the mystery of the Northern lights is not that much of a secret anymore. Even though this is the truth, many people still often travel to Finnish Lapland to chase them and more often than not, seeing Auroras is the highlight of travelers’ Lapland holiday.

Hunt the Auroras from your very own glass igloo

If you are not that adventurous type of a person and prefer comfort compared to unpredictable weather, cold hands and wind, you also have different kind of options for Aurora hunting. When staying with us, you can do your own search for Northern lights even directly from the comfort of your very own glass igloo.

Even though Ranua is not world famous of its Auroras like many other places in Finnish Lapland, our small town actually is really good for this Lapland holiday activity. As a small town, Ranua does not suffer from light pollution and also the street lights of the town are shut down after 11 p.m. from Monday to Thursday. This virtually makes the whole village dark, which means that Auroras are well seen even in the center of the town. The first two images of this blog post were actually captured right in the middle of the town of Ranua.

When staying in an AuroraHut Glass Igloo, you can also take full advantage of the mobility of your igloo. September usually is a month when lake Ranua is completely free of ice, which makes it possible for you to go for northern lights hunting by using the igloo’s own electric engine. This always allows you to reach the very best spots for enjoying the nature phenomenon of Lapland.

Learn more about our igloos.