Share on whatsapp
Share on facebook
Share on twitter
Share on linkedin
Share on email
Thanks to the long-lasting cold weather, the ice fishing season has started practically all over Finland. One of the most popular forms of fishing in the winter is the perch ice fishing, which is not only quite easy but also a rewarding way to go fishing. In this blog post, we’ll take a little closer look to this popular winter activity. 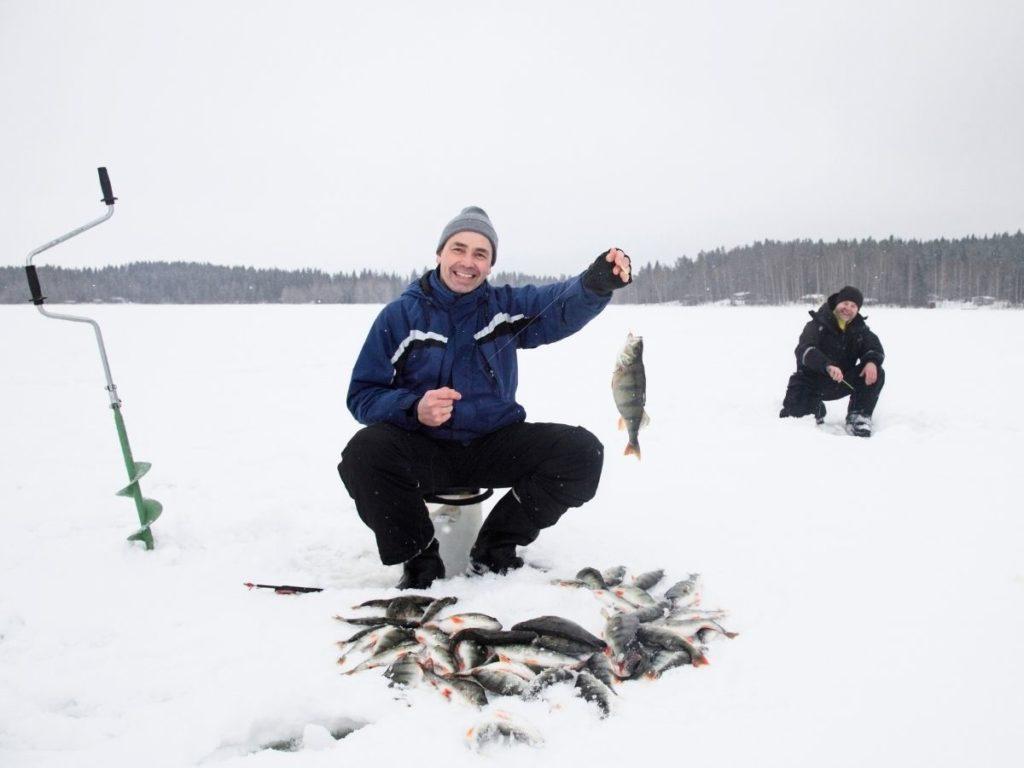 The popularity of perch fishing is explained in particular by the fact that, in addition to pike and various roach fish, perch is the most common fish species in our waters.

In some small ponds, perch may even be the only inhabitant of the water body. This is due to its excellent ability to tolerate the acidity of water. The prevalence of the fish species also means that it is possible to fish it practically anywhere in Finland.

Unlike pike and roach, perch is also generally a much-appreciated food fish. If perch were not so common as a species, it would probably be an even more prized fish specifically for the Dining Table. The flesh of the perch is lean, light in color and firm in structure. Although perch is used as a food fish for many uses, smoking is perhaps the most common form of perch. Especially in the Savo region, small perch are also cooked into fish pasty.

Another good aspect of perch’s food use is that the stocks are so strong that even fairer fishing does not threaten their viability. Perch also has minimum size requirements or daily catch quotas. However, when fishing, you should keep common sense with you, and not to catch a larger amount of fish than you intend to eat.

During the beginning of winter, the best perch catches are usually made from the shallows surrounded by deep spots. Such a place allows perch to move easily between deep and shallow. In addition to the shallows, it is good to go through the shallow benches found at the tips of the peninsulas in the islands, for example, where deeper water can be found.

The fishing itself should be done systematically and a good place to start could be at the edge of a known shallow, for example. Shallows are usually particularly for smaller fish, but larger individuals can also be accommodated. Perch can be unpredictable as a prey fish, and even a good-sized flocks of fish can be found in a surprisingly shallow location.

It is advisable to drill holes every few meters, as the bottom shapes of the water body can vary considerably, even in a small area. By making several holes, you get a good idea of the bottom itself, and if you manage to find, for example, steep benches or large rocks, it is also likely that fish will be found.

During mid-winter, large perch are found mainly at the deeper edges of the shallows, where water can be up to 10 to 15 meters, especially in large bodies of water. If fish seem to be present at a certain depth, it is worth actively continuing to fish at that depth.

If the fish do not seem to be actively moving from one place to another, the fisherman himself must be active in such a situation. It is not advisable to spend long periods in an empty hole, but you should look for fish somewhere else.

A wide variety of ice fishing lures can be used in perch fishing, each of which certainly has its own fan base. Thus, during mid-winter, the perch is usually a bit passive and is most easily interested in slow-movement lures.

Perhaps the most interesting way of perch ice fishing is when you fish with stabile lures, which usually mimic smaller prey fish. In large lakes and at sea, these lures up to 5 to 7 cm long can be used for perch. In addition, fly larvae can be used as an additional attraction for perch. The larvae are placed on a hook found on the abdomen of the lure which is hanging straight downwards and is usually also colored.

When fishing, you should go through all the depths. You can start right from the bottom, and if there is no action, the lure should be raised about a meter at a time before changing places.

The balance lure is floated with short and fast pulls and the tick is allowed to be in place for a moment before a new bet. Ice fishing is a separate art form in all fisheries and is usually at least as important as the size or color of the lure.

Vertical lure is perhaps the most popular and simplest form of fishing for perch. Vertical lures could also easily be called a general ice fishing lure, which works reasonably well in practically all seasons and in all kinds of conditions. Sometimes this simple form of lure can also be the most effective of all the options.

Vertical lures are both fast and wide-ranging gear for movement. Under the fishing line itself, you can place either a normal ice fishing hook at the end of the line or, alternatively, a colored hook, which is usually placed at the end of a short metal chain, which also has a small lure lock for quick and easy hook change. Due to its versatility, such a system is popular among people who compete in ice fishing.

If perch happens to be inactive, you can try to clear up the situation by using a small “morri” below the vertical bar. In addition, a small mormuska, for example, and a caterpillar of a finer-structured porcupine, which is a real delicacy of perch, can be placed on the head of a fishing line that is about a long length.

Spring is the best time for perch ice fishing

For perch fishing, the best season is in the ears of spring. In this case, the water warms up slowly and this also creates new life for perch that have lived in the dark and cold over the winter. Perch also spawn during April-June, which is why they have to refuel hard during the spring season.

Spring is also a nice time for the angler when the spring sun is already warming up comfortably. The good thing about spring ice fishing trips is also that during the trip you can usually manage with just vertical ice, which can be used to raise really handsome catches even in a short time in the event of a large flock.

When spring comes, perch usually head to the shallows to get easy food. The good apes found in the early winter may no longer work, as the fish have now moved to new places.

In the spring, the angler should definitely try places to be found below the steep cliffs, for example. These places can be flat and still favored by perch at this time of year. Such sites are often found near the wintering grounds of perch.

As the departure of the ice is already approaching, the perch are slowly beginning to head toward their final spawning grounds. In this case, you should concentrate on ice fishing near the bays. Various islets and ravines are also good places for perch spring fishing.

Perch ice fishing does not require a huge amount of equipment, which allows you to get started in the hobby with very little effort. Even many supermarkets sell pre-assembled sets, which are usually available for as little as ten euros. You can get off to a good start with these sets, as long as you remember to check the tensile strength of the line and the tightness of the knots before starting fishing.

Other profitable purchases are, of course, baits, which can usually be either fly larvae or fishing rods. Drilling holes, on the other hand, requires a drill, especially in frosty places, although in places where there are a lot of anglers, old holes can usually be used as well, and the drill can be borrowed from a co-fisherman for a while. For convenience, it is worth booking some kind of ice stool, which can also be a combination of a stool and a backpack.

In Ranua, the best places in the locality for perch fishing can be found in Simojärvi and in Ranuanjärvi, which is a lake located in the center of the village. Lake Ranuanjärvi could be considered as a fairly underrated fishing location as in addition to perch, it is possible to catch pike, whitefish and even rainbow trout from the lake.

There are also some equipment in our company’s premises, which we can also rent out. As a specialty, we also have the opportunity to take a look inside the movable glass igloo.