Share on whatsapp
Share on facebook
Share on twitter
Share on linkedin
Share on email
Snowmobiling has been one of the most popular winter activities in Finland for decades. The fast-paced snowmobile has lasted well for a long time and has been one of the favorite winter time vehicles from one generation to the next. In this blog post, we will take a closer look at snowmobiling and the varied routes found in Ranua. 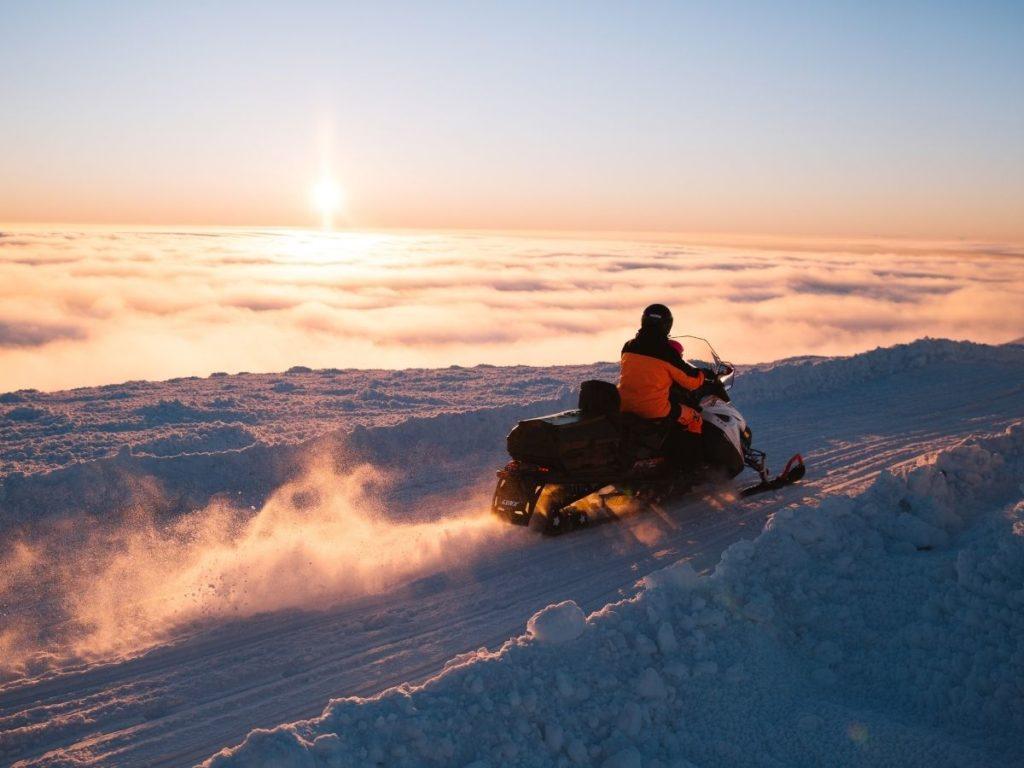 Where can you drive with a snowmobile?

With regard to snowmobiling, the driving environment differs considerably from other motor vehicles, with the exception of ATVs, which are also designed primarily for off-road and nature driving.

However, driving a snowmobile is subject to certain regulations, which I will explain next.

The snowmobile is generally used on specific routes that do not require a separate permit. The same rule applies to ice-covered water bodies. If an unofficial track is found in the area of ​​the body of water, a permit must be obtained from the route operator. On the snowmobile route in the ice area, on the other hand, a separate permit for driving is not required.

The snowmobile must not be used on public roads except when the situation so requires. Such a situation may arise, for example, when crossing a road or bridge, or if access to a toboggan run or refueling is possible only by using the road.

The same applies to a situation where off-road use is found to be unreasonably difficult or driving on the road is considered necessary for crossing a safe road. In such a situation, the sledge may also be temporarily driven along the road. In this case, however, the unpowered part of the road must be used first.

Official routes have usually been driven to places where snowmobiles usually move. The routes therefore aim to meet the needs of the sledding hobby itself as well as possible. For their part, the official routes also aim to cause as little harm as possible to other nature.

Driving in the deep snow

Snowmobiles were once designed for driving in deep snow. However, driving in such areas requires a separate permit from the landowner. In recent years, however, more permit areas have been established in Finland that allow driving in deep snow and with more challenging conditions.

Seen from Ranua, the nearest deep snow snowmobiling area can be found in the neighboring town of Posio, which has the largest so-called Freeride area in Finland.

At Posio, it is possible to purchase separate Freeride permits, which cover driving on the Koro and Voho plots with a total area of about 25 thousand hectares. In addition to marked routes, this permit also makes it possible to drive outside marked routes, provided that no damage to nature is caused. More information can be found on the Posio Lapland website.

Who can drive a snowmobile?

On official routes, a snowmobile may be driven by a person who has reached the age of 15 and has at least a T-class driving license. Driving in an enclosed area, for example for driving practice, is also possible for children under 15 years of age. However, closed areas have their own precise regulations, which are not met, for example, by their own yard or field area. A closed area can be considered, for example, an area bounded by fences to which access can be restricted.

In addition, a person riding a snowmobile must learn how to use the vehicle properly and safely. In addition, the driver must be in possession of traffic rules for driving.

The most important single safety device for a sledger is a helmet to be worn on the head. The use of a helmet is mandatory for both the driver and any passenger on board. The obligation to wear a helmet also applies to passengers riding in an open sleigh.

Like other traffic, snowmobiling involves a variety of speed limits. On the terrain, the sled can be driven up to 60 kilometers per hour and, in exceptional cases, the maximum speed on the road is 40 km / h.

In the case of ice-covered watersheds, the speed must not exceed 80 km / h, while on official routes the speed limit is also 60 km / h in ice areas. If a sledge is connected to the sled, where people are transported, the maximum permitted speed is 40 kilometers per hour.

The snowy and soft-looking winter terrain can confuse the snowmobiler and hide potential dangers. The unfortunate fact related to snowmobiling is that there are hundreds of traffic accidents in Finland every year caused by snowmobilers, in which about 5 to 10 people die every year.

The majority of serious accidents concern so-called leisure snowmobiling, while these are much less represented in work and utility driving. The majority of snowmobile-related accidents take place on ice areas and during the weekends.

According to statistics, more than half of those who died in snowmobile accidents were under the influence of alcohol at the time of the accident. The most common cause of death is falling into the water and drowning, either due to melted areas or falling through weak ice.

Typical snowmobile accidents are also characterized by excessive speeds and the fact that the helmet is either not worn at all or is misused.

In less serious accidents, the most common cause is that inexperienced drivers did not have sufficient skills to drive a vehicle. For example, in a bend, an inexperienced driver may inadvertently push the throttle to bottom, causing the snowmobile to accelerate sharply, losing control, and slipping off the route and often to an obstacle in front, such as a ditch or a tree.

Ranua, known as the gateway to Lapland, has become known during the winter season, for example, for its well-maintained and versatile snowmobile routes. Routes from Ranua in depart in all directions and we have official connections to Rovaniemi, Vanttaus, Posio, Syöte, and the municipalities of Ii and Simo.

In Ranua, all the routes are official, which means that they are maintained by the municipality of Ranua about 3-6 times during the driving season, depending on the weather and snow conditions. As the Ranua routes are all official routes, they do not require separate career permits.

The municipality of Ranua is responsible for maintaining the routes up to the municipal boundaries. Separate maps of sledges can be found on the Kelkkareitit.fi website. Real-time information on the maintenance of snowmobile tracks can be found on Infogis’ map service.

Ranuanjärvi, located in the center of our village, is an excellent connection point for snowmobile tracks, from where you can either start or continue your journey in all directions. This is one of the good reasons why our own accommodation is quite an ideal break for drivers as well.

The good reasons for stopping do not end there either, as the sleds have remarks in other ways as well. Our yard can accommodate dozens of snowmobiles at a time, and it is also possible to park in the yard with a large trailer. A long driving day, on the other hand, is nice to end with a good steam bath in the old-time beach sauna and a nutritious meal. On the other hand, it is good to start a new driving day after a hearty and varied breakfast.

Without further ado: we warmly welcome all snowmobile enthusiasts to both enjoy and stay in Ranua this winter as well.