Plus 10 interesting facts about Finnish Lapland 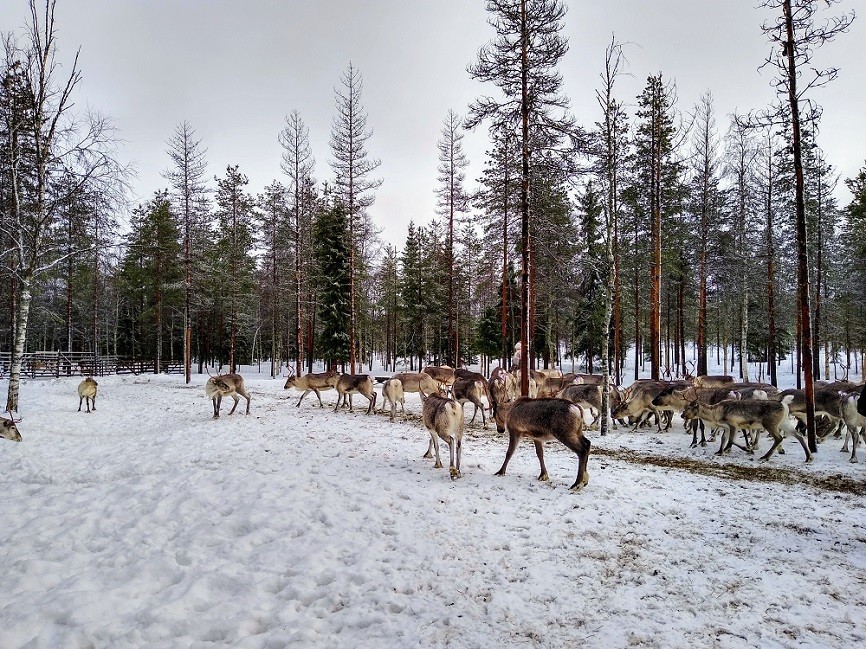 Finnish Lapland actually is really large area. The size is more than 100 thousand square meters, which means that Lapland almost covers one third of Finland’s total area of 338.44 thousand square kilometers. The area is bigger than the Netherlands, Belgium and Switzerland combined. There are 21 municipalities in total in Lapland.

In Lapland’s most northern point Nuorgam, sun is visible from May 16th until 29th of July, which mean that the nightless night time lasts for 74 days. Kaamos time, when the sun doesn’t raise above the horizon, on the other hand lasts for 51 days.

There are only a few cities in Lapland of which Rovaniemi is the largest, with population of about 63 thousand habitants. Other cities in Finnish Lapland are Kemi, Tornio and Kemijärvi.

As Finland doesn’t have any mountains, this fact of course also applies to Lapland area as well. There are many fells though that climb reasonably high. The highest peak in Finnish Lapland is Halti, which is 1324 meters high.

Even though Lapland doesn’t have an official capital, Rovaniemi is widely known as the capital of Finnish Lapland.

The city of Rovaniemi is actually and also quite fittingly – shaped like a reindeer’s head with antlers and all. About 90% of Rovaniemi burned down in World War II, leaving architect Alvar Aalto a blank canvas to paint the “winter capital” practically from the scratch.

In Lapland area, Finland has borders with Norway, Russia and Sweden.

Common spoken languages in Finnish Lapland are Finnish, Swedish and Sami. Mainly thanks to the tourism industry, you will also get along just fine with English.

The Arctic Circle is a circle of latitude that runs 66°33′45.9″ north of the Equator. It marks the southernmost latitude where the sun can stay continuously below or above the horizon for 24 hours – these phenomena are known as the Midnight Sun in the summer and the Polar Night (“Kaamos”) in the winter. In Rovaniemi, you are able to cross the Arctic Circle line in many places. Probably the most popular place to do this is The Santa Claus Village, where the border is also marked on the ground. You can even receive a certificate of the “line crossing”.

Even though Santa Claus’ Office is located in Rovaniemi, the real home of Santa Claus is considered to be Korvatunturi (mountain or fell), which is located in Savukoski. The “mountain” is 468 high in the Finnish North pole. You can even send your letters to Santa in Korvatunturi by using postal code 99999.

Lapland’s most popular cheese is called The Finnish Squeaky Cheese (Leipäjuusto in Finnish). It’s typically made from cow’s milk – but can also come from goats or even reindeer – the cheese is baked into a pie shape and cut in wedges. It’s traditionally served with cloudberry jam. The cheese has light color with darks spots on top of it.

Cloudberry is the most famous berry of Lapland and tourists from abroad and Southern parts of Finland pay even tens of euros for one kilo of the golden berry. Ranua is the unofficial cloudberry capital of Finland. The main market area of Ranua for cloudberry and other Northern berries is called as the Cloudberry Market, which is located in the center of the small town. Visit Ranua has also created a specific map on their application, where you can find cloudberry swamp locations for free.

While we typically know reindeer as Rudolph, Dasher and Prancer, reindeer is also a big food source in Finnish Lapland. Reindeer meat can be prepared in many different ways. The meat can be dried, cured, smoked and served in steaks. Probably the most popular option, though is the reindeer sauté, which is traditionally served with mashed potatoes and lingonberry jam.