Share on whatsapp
Share on facebook
Share on twitter
Share on linkedin
Share on email
Seeing and photographing the aurora borealis have been popular Lapland holiday activities for ages. Nowadays there are multiple aurora forecasting services, in turn, which make it much easier to actually see the northern lights. In this blog post, we present a few services that specialize in space weather as well as northern lights forecasting. 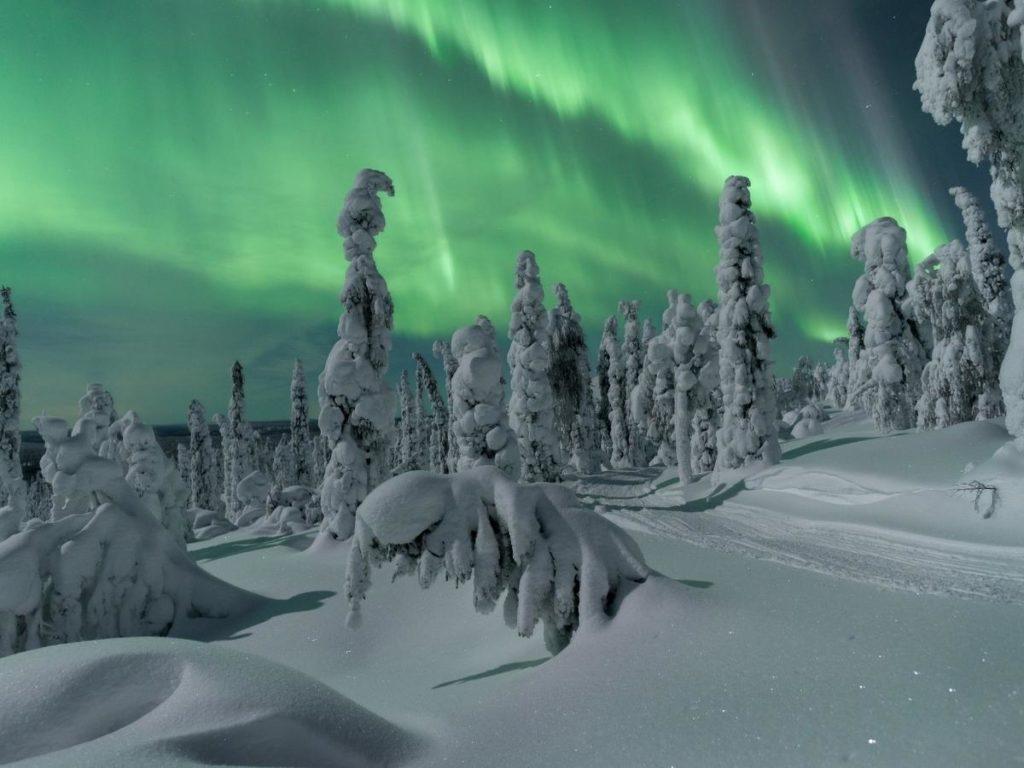 The Finnish Meteorological Institute’s northern lights and space weather service is my personal favorite of the aurora forecasts. It is a very reliable website that offers hourly statistics from many different measurement points all over Finland.

What is particularly great about the Finnish Meteorological Institute’s forecast is that a longer-term forecast of the prevailing space weather can also be found right at the beginning of the site. The Northern Lights Probability section, in turn, tells the forecast for the next three nights. Since cloud cover plays a very important role in detecting aurora borealis, I think it’s great that a visitor from the same page is also directed directly to the subpage that follows the cloud cover situation.

Magnetic activity, in turn, can be monitored on the site using an easy-to-interpret bar chart. The higher the bars in the table, the better the chances of detecting northern lights.

If I had to choose only one of all the Aurora forecasts available, my choice would very likely fall precisely on this particular service. 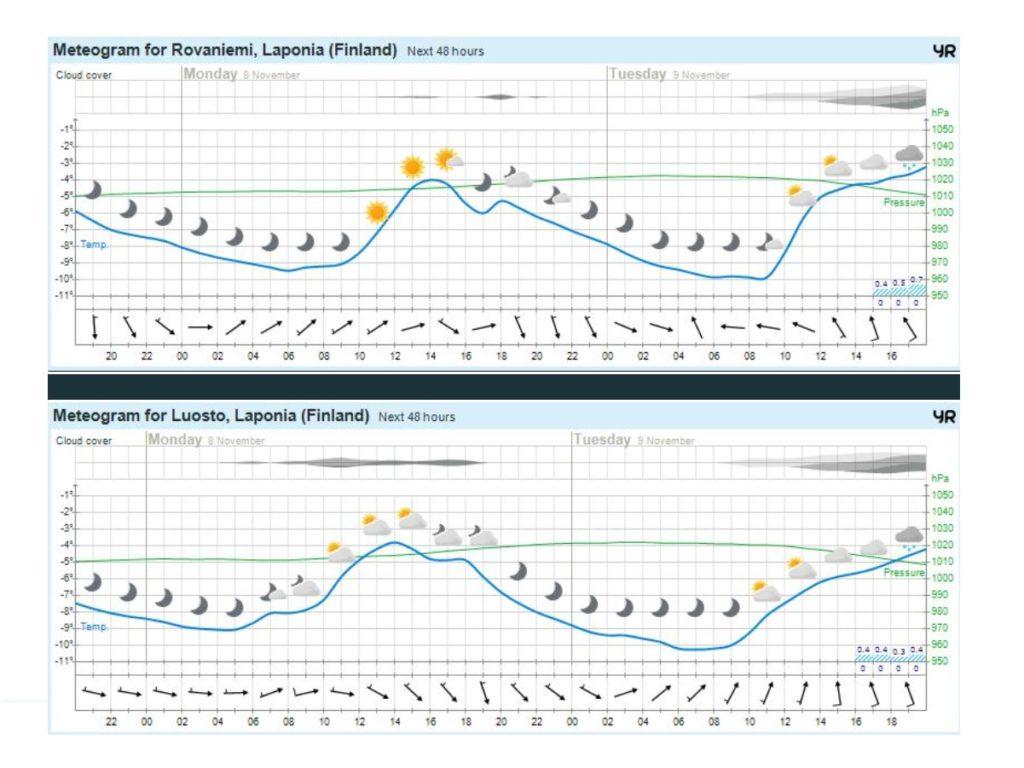 When the northern lights activity is at a high level, the alarm is received in real time either through a downloadable application or a text message. Northern lights are usually visible 15 to 60 minutes after notification if other conditions, such as cloud cover, are favorable.

Making a reliable northern lights forecast is a challenging endeavor. The solar wind that causes the phenomena can spread from the sun to the Earth in a day or two (the speed of the solar wind can vary from 300 to 1000 km / s). This means that all forecasts found even online include inaccuracies of several hours, sometimes up to 10-20 hours. So if you are on holiday in Lapland precisely because of the northern lights, it may be a good idea to download a real-time northern lights forecasting service as a friend, which saves a lot of time and effort and you never look at the northern sky in vain.

The app uses a camera system designed to detect northern lights, followed by both the Google Play Store and Apple’s AppStore. In addition to the application, it is possible to subscribe to notifications on your phone via SMS.

To download the application, a separate login key is required, which is tied to the destination / resort. This is because the app only provides alerts for one item at a time. The service is currently available in Ivalo, Levi, Ylläs, Muonio, Rovaniemi, Apukka, Saariselkä and Ranua.

Jemma.mobi would seem to be very popular, especially in the Finnish Northern Lights search group found on Facebook.

It’s a simple site with a lot of different metrics related to space weather and its variations. Most of the meters are solar wind satellite data released directly by NOAA, which are then converted to graphs. Some of the measurement values found on the site are in turn calculated by combining readings from other meters. The user of the site can choose to hide metrics from their view whose readings they do not want to monitor at that time. Hidden gauges can be revealed one by one from the link at the bottom left of the page. 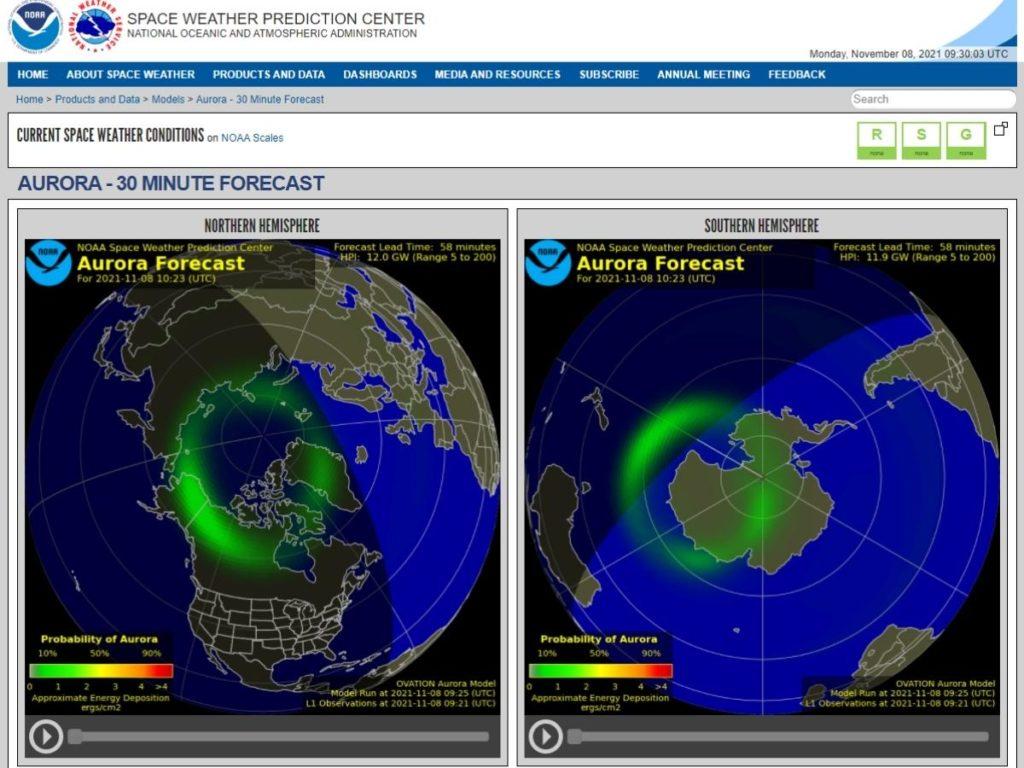 The Space weather Prediction center is a service provided by the National Oceanic and Atmospheric Administration, ie the aforementioned NOAA, from which space weather can be monitored using, among other things, various charts and satellite images.

The same site also has a handy 30-minute forecasting service designed to provide short-term forecasts of the location and intensity of northern lights. This service is based on the so-called OVATION model and, as the name implies, offers a 30- to 90-minute forecast of space weather. The time interval used in the forecast is based on the time elapsed by the solar wind between the L1 observation point and the Earth.

The two maps in the 30-minute forecasting service show both the South and North Poles of the Earth. The brightness and location of the northern lights typically appear on maps in green and oval shapes with the Earth’s magnetic pole in the center. The green shapes turn red as Aurora is predicted to be more powerful. The sunlit side of the earth is indicated by the lighter blue of the ocean as well as the lighter color of the continents.

Northern lights can often be seen somewhere on Earth just between sunset and sunrise, as northern lights are not visible to the bare eye in daylight. The aurora does not have to be directly above, but can be detected even from a distance of 1000 km when the light phenomenon is bright enough and other prevailing conditions are correct.

Aurora can be considered an indicator of current geomagnetic storm conditions and also provides situational awareness for many modern technologies. For example, Aurora directly affects HF radio communications and GPS / GNSS satellite navigation. The phenomenon is closely related to the inducing currents in the earth, which also affect the transfer of electrical power.

Both short-term and long-term forecasts are available for a variety of services and applications. Of these, short-term northern lights forecasts are more reliable and definitely worth monitoring. Changes in space weather can happen very quickly and the nature of Lapland surprises the northern lights firefighter, so to speak, completely from the bush. In this case, it is better to use services that give only ten minutes’ notice based on information from satellites and sensors.

With Northern Lights activity just beginning, magnetometers that measure the magnetic field on Earth’s surface are of particular importance. A sharp change in the magnetometer measurement curve usually marks the beginning of a sub-storm. Those interested in the northern lights usually follow the magnetometers and the images of the celestial cameras very closely on a suitable evening for a long-term forecast. However, you shouldn’t trust the cameras too much, because if the northern lights are already noticeable, it may be too late to shoot at this stage, because in the worst case, the light show only lasts for minutes.