Share on whatsapp
Share on facebook
Share on twitter
Share on linkedin
Share on email
The popularity of local food, i.e. food produced locally or regionally, has grown in recent years. This positive trend is also well visible in Ranua, where for example, Keskitalon Ylämaankarja produces local food in the form of highland cattle products made from their own herd. In this blog post, we get to know the organic farm in a little more detail.

The term local food can be understood in many different ways, because in order to fall under this term, the food does not necessarily have to be produced locally, but in this case we can also speak of a larger area. In Lapland, local food can mean, for example, food produced in any Lapland and sold up to hundreds of kilometers away.

However, there are many good reasons for favoring local food. The food chain of food produced in the surrounding areas is usually very short, which means that the food always arrives at the table fresh and without being unnecessarily burdened by transport.

On the other hand, the origin of the food is also very clear from the local food, and the food can even come to the table produced by one’s own acquaintances or friends. A third clear advantage is also related to locality: what could be more convenient than supporting local food production and at the same time seeing how local producers are also able to employ local labor. 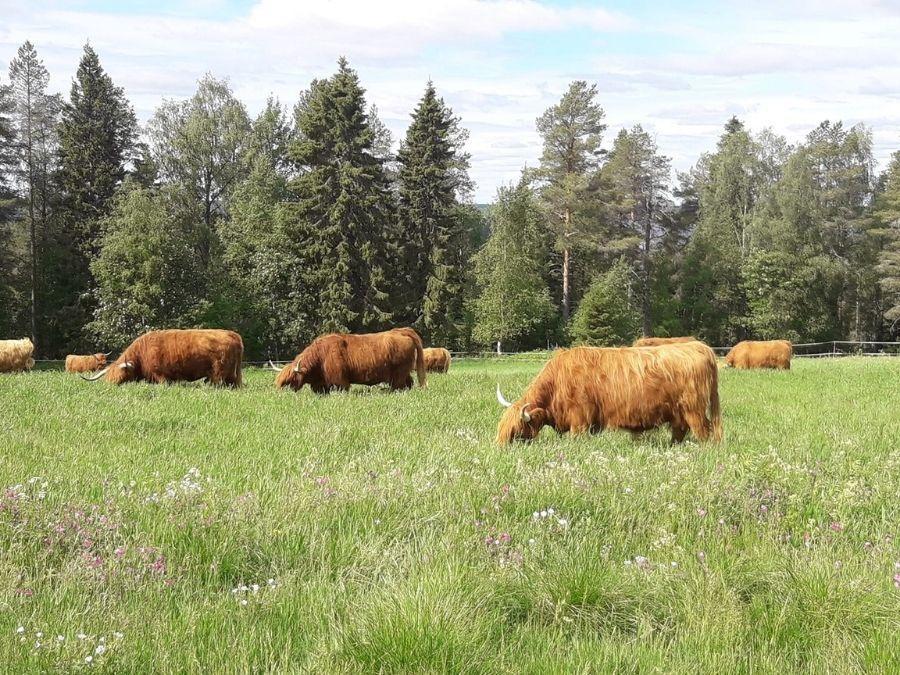 In Ranua, local food production has taken great strides over the past years and one of the most visible local production companies is an organic farm in Putkivaara called Keskitalon Ylämaankarja.

The organic farm breeds highland cattle, as the name implies, from which the meat is sold directly. From the local producer’s selections, the meat of the highland cattle is available in many different forms, as well as processed products, all of which use 100% local highland meat, ie stew.

Keskitalo Ylämaankarja’s partners are also mainly local and Lapland residents: the transport of animals, slaughter, cutting of meat, raw cooking, packaging and the production of processed products are all handled with the help of Lapland companies.

The Highland Cattle itself has many different nicknames, which include Highland Cattle, highlander, and in Finnish, haikku. The highland cattle living on the farm of the middle house are reared all year round and are fed with organically produced fodder. Feeding takes place on pasture.

The highland herd is native to Scotland and is easily recognizable by its long horns as well as its pale coat. It is also a lofty and very peaceful breed, shaped by the harsh conditions of Scotland into a very weatherproof and excellent pastor.

Sharks also thrive very well in the conditions of Lapland, which include e.g. bright summer nights and occasional heavy frosts in winter. Although the cattle of Keskitalo Ylämaankarja spend their time all year round on outside, there are also weather shelters and drained sleeping areas for the cattle, which they can either decide to use or not use.

The elders of the mother herd of the winter frost season, i.e. the highest individuals in the herd value scale, should be chosen as their sleeping place instead of a bed of pure snow litter.

The smells of the highland cattle also play an important role in keeping the old village landscape of Putkivaara tidy. This is done by grazing old natural pastures in addition to cultivated pastures.

The Highland Cattle is an indigenous breed with a breeding time almost double that of the most common breeds. Calves grow in maternal care until about 8-9 months of age, feeding on both maternal milk and various herbs.

After weaning, calves receive organic feed for about a month alongside silage. After this stage, the feed for calves consists of grass in three different forms, which are feed from normal grazing, silage and dry grass. Organic feed for calves is given only in small portions and is rarely available to them, with the help of which the purpose is to facilitate handling and care situations.

The meat of the highland cattle is of high quality and healthy, as it has less fat, cholesterol and, on the other hand, more iron and protein than traditional beef. The properties of the meat have been studied e.g. In Britain.

According to Eija Nurmela, one of the entrepreneurs of Keskitalon Ylämaankarja’s organic farm, the local food products have been really well received and the farm has succeeded in finding many regular customers as a result of three years of active marketing. Local food, the origin of the food and organic production seem to be very interesting in Lapland.

The organic farm markets its products mainly on Facebook, where sympathetic animal images elicit a lot of positive reactions in humans. In addition to social media, Keskitalo Ylämaankarja has been involved in a project promoting local food in the municipality of Ranua. The Tilalta.fi online store for local food landed in Ranua last autumn. With the online store, local food is more easily available, when in addition to the fixed pick-up point (Kiireen Raja lunch restaurant in Ranua), there is also the possibility of online shopping.

The organic farm has received very good feedback on its products. According to Nurmela, customers appreciate tasty, locally grown meat and the fact that the entire processing chain operates in the north. The meat used in the processed products in our selection is 100% is the organic farm’s own upland, ie the haikku and the pork-free nature of the products has also received much praise.

However, product development is an ongoing job and new ideas are being tested all the time. In product development, Keskitalo Ylämaankarja favors, for example, the tips it receives from customers and co-operation with its other Lapland partners. Even now, the organic farm is working on new recipes for experimental batches, and it is hoped to have something new for the winter again.

You can get acquainted with the entire Keskitalo Ylämaankarja local food selection in the Tilalta.fi online store.

Can you find the best burger in Finland in Ranua?

Arctic Guesthouse & Igloos is one of Keskitalo Ylämaankarja’s local partners. Many local food products have been on the menu of our restaurant located on the premises of our company for a long time.

Perhaps the most significant of the individual products is the hugely popular hamburger, which is also a really great local food option. In addition to the burger steak being made from Keskitalo Ylämaankarja, the burger bun is also a local handicraft, as the buns are made at the lunch restaurant Kiireen Raja, which is located in the center of Ranua village. The design work is also a completely local handwriting, as the burger was designed by Elias Sarajärvi, who made a long career with Scanburger.

The number of haikku products in our restaurant will also increase in the near future, and the renewal of our menu is ahead in the very next few days. As new haiku products, the list will include at least a hot dog with a highland herd. In addition to the burger already mentioned, both haikku kebab and sausage have been found in our selection.

Article images and about the subject elsewhere: Keskitalon Ylämaankarja’s Facebook-page