Share on whatsapp
Share on facebook
Share on twitter
Share on linkedin
Share on email
The midnight sun, also known as nightless night, is a natural phenomenon found in Finnish Lapland, during which the sun does not fall below the horizon throughout the day. This is why it is the opposite of a polar night, which is encountered in winter. 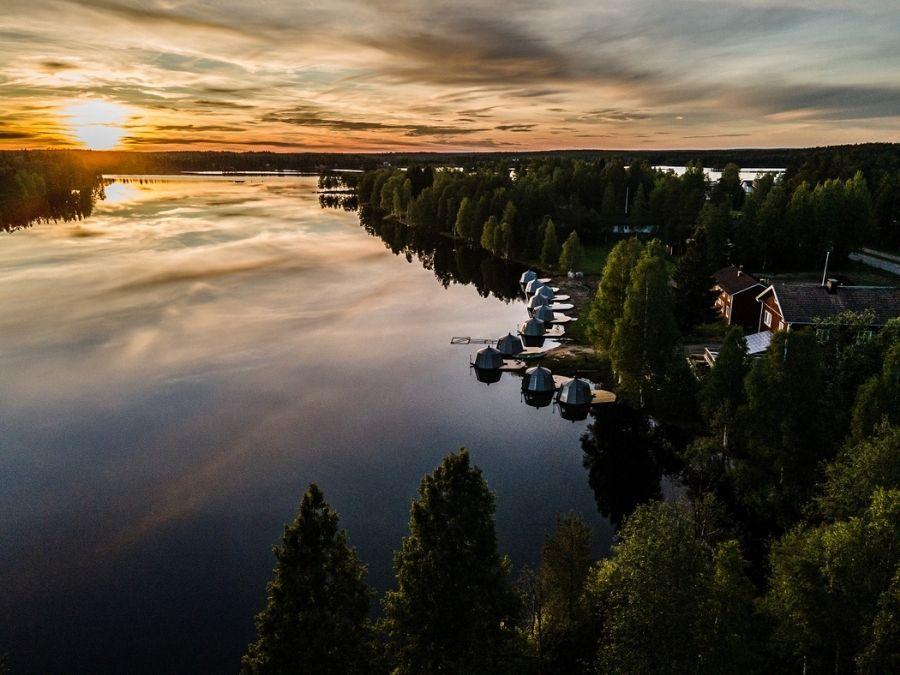 What causes the midnight sun?

The nightless night phenomenon is due to the slope of the Earth’s axis of rotation relative to its orbit. The phenomenon occurs only in the polar circles and at higher latitudes. The phenomenon is also longer the closer one is to the polar regions. For example, in the northernmost part of Finland, Nuorgam, the sun stays above the horizon continuously from 16 May until 29 July, for a total of 74 days.

If the sun was not so large and if the light did not bend in the atmosphere, the polar circle would act as the boundary of the area where the center of the sun stays one day a year above the horizon throughout the day. In the Arctic Circle, this happens at summer solstice, which we have on either June 20, 21, or 22. In the southern polar circle, this, in turn, occurs during the winter solstice of the northern hemisphere, i.e., on December 21 or 22. In this case, the polar circles would also act as the boundaries of polar nights.

However, the massive size of the sun and the deflection of the light causes that at least the upper parts of the sun will remain above the horizon around the clock approximately one latitude south of the Arctic Circle. In Finland, this border runs slightly south of the city of Kemi.

The border of Kaamos (polar night), on the other hand, runs about a degree north of the Arctic Circle. This means that there are for example Rovaniemi, Kemijärvi, Kuusamo and part of Kemi located between these two zones. This makes these areas a bit special as you are able to see the midnight sun in them but not the polar nights.

How long does the nightless night last in Finnish Lapland?

The summer solstice is the longest day of the year

The brightest time of the year and the longest day of the year coincide with the summer solstice. The summer solstice in Finland takes place between June 20 and 22. In this case, the sun shines perpendicularly from the sky on the Tropic of Cancer turning circle, i.e. in the latitude of 23.4 degrees north latitude. During the summer solstice, the maximum angle of the sun in Helsinki, for example, is 53.5 degrees.

In the Nordic countries, the longest day of the year is celebrated as the “Midsummer Festival”, ie in Finland Midsummer. Although the sun is at its highest during the midsummer celebrations, the warmest moments of summer do not statistically occur until about a month later, ie the end of July. This is due to e.g. that the Earth’s atmosphere takes its time to warm up.