Ruska a.k.a fall foliage – part of the magnificent colors of autumn in Finland

Share on whatsapp
Share on facebook
Share on twitter
Share on linkedin
Share on email
Autumn in Finnish Lapland, in addition to the northern lights, is also known for ruska a.k.a fall foliage, which in turn take care of the wonderful splendor of colors during the daytime. Since we have previously focused strongly on the northern lights on this blog, it is appropriate to get to know this second autumn natural phenomenon a little more closely at the dawn of autumn. 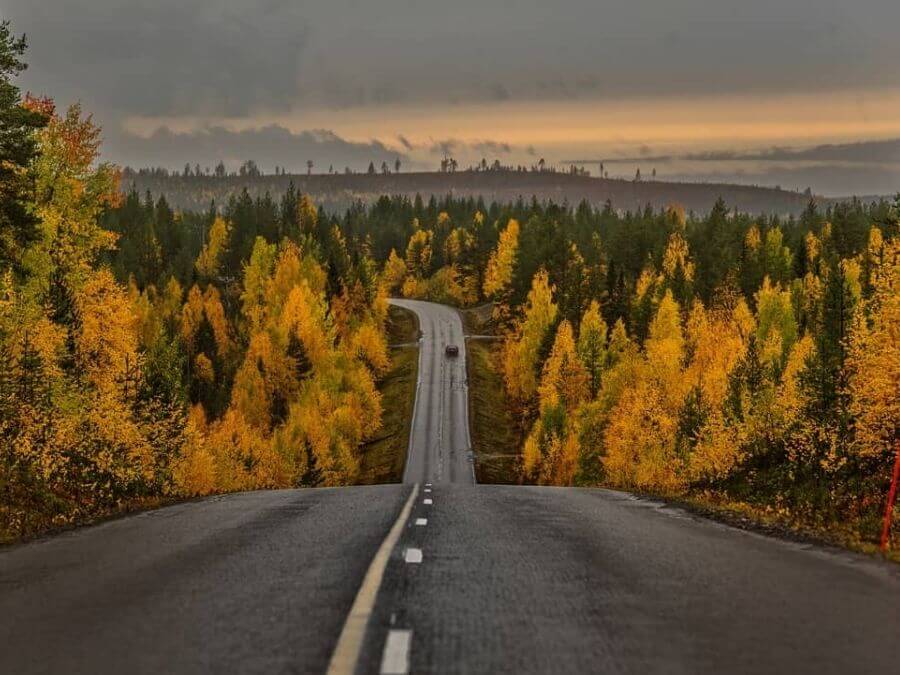 What does ruska mean?

The word ruska (aka fall color or fall foliage) means the brilliance of the plants that shed their leaves in autumn, due to the dyes contained in the leaves. Ruska is found all over the globe in places with clearly distinguishable seasons. It is possible to admire the fall foliage in both trees, as well as in herbaceous plants that grow in the ground level. In Finnish language the fall colors visible in the trees is called as puuruska (fall foliage in the trees), and the splendor of color seen in the sparrow plants is called maaruska (fall foliage in the ground).

What causes the fall foliage?

In Finland, ruska is a sign of the beginning of autumn and the end of the growing season. In this case, the decrease in light and the decrease in temperature lead to the cessation of plant contact, whereby the leaf green of the plants begins to decompose and other dyes contained in the leaf, such as red anthocyanins, orange-red carotenoids and yellow xanthophylls, are released.

The molecules that used to form leafy green move to a “store” after decomposition into the longer-term organs of plants, that is, in trees, for example, to their trunks and roots. This is because the formation of leaf green consumes a lot of energy from the wood, which should not be wasted, but also allows the same material to be used again.

There are also exceptions for trees, as gray and black alder, for example, drop their leaves green in the autumn. This is because alders do not need to conserve nutrients due to the nitrogen-fixing bacteria living in their roots. While the trees bind nutrients from their leaf green into the trunk, they also clean themselves by transferring the contaminants that have accumulated during the summer to the leaves, which later fall to the ground.

Once the trees have stored the leafy green, the hormones in the trees trigger the breakdown of the cell walls in the leaf stalks. During this process, the cells die by a couple of cell layers in an area called the detachment zone, where detachment cells form. The junction between the branch and the leaf also closes to prevent fungi and bacteria from entering the tree branch. After the formation of the detachment cell, the leaves are attached to the branches of the tree so loosely that their own weight may be sufficient for the leaf to detach and fall to the ground.

When does the fall foliage season start?

Many travelers who want to schedule their visit to Lapland during the best fall foliage season. It is worth paying close attention to the timing of the trip, because according to an Ilta-Sanomat story, the most beautiful fall color lasts only about 10 days in Lapland.

Plants growing in Lapland are generally very similar genetically, as they are used to growing in rather harsh conditions and at the mercy of weather conditions. Due to this, fall colors hit all the trees and plants in the Lapland area at about the same time. The difference is significant in Central Europe, for example, where there can easily be a month and a half difference between trees in the same area at the time of autumn. In Central Europe, for example, the situation may be such that ruska hits the first trees in early October, while the last ones do not play along until mid-November.

A dry habitat usually advances the time of autumn, while cold weather does not in itself affect it, although exposure of yellowing and yellowing leaves to night frosts makes them shed more easily than normal. In addition to this, it is also believed that night frosts further increase especially the redness in the leaves.

The yellowing of leaves can be observed already in July – August, but these are not yet indications of the onset of autumn, but the reason for this phenomenon is usually various fungal diseases and the prevailing drought.

Ruska starts in Lapland from the northernmost parts of the country and its peak progresses from there to the south. It then “advances” about 500 kilometers in about two weeks of time. In northernmost Lapland, such as Nuorgam and Utsjoki, fall colors are usually at their best as the second week of September is known. The brilliance of color continues to decline from this for another ten days until all the leaves have dripped about a week before the end of September. Maaruska passes a little earlier than the peak of the tree and its peak is usually less than a week earlier than the peak of the tree.

In southern Lapland, the autumn peak occurs at a slightly later time, ie in practice in Rovaniemi and Ranua, for example, for the period between about 15 and 20 September. The autumn time also behaves like these in northern Lapland at these altitudes, meaning that the most beautiful colors can be enjoyed for a few days, which lasts a little quieter until the beginning of October, when the majority of the leaves have usually fallen to the ground.

At the height of Oulu and Kajaani, ie at the 65th latitude, the autumn peak arrives again slightly later than southern Lapland, ie between about 20 and 25 September. In these areas, it is still possible to admire the colors of autumn even during the first weeks of October, until by the middle of the month the trees have again usually dropped almost all their leaves.

Some of the deciduous trees in southern Finland, such as oaks, hold their leaves more tightly than other trees and only drop their yellowed leaves during the first frosts.

Autumn colors also appears in different  ways between various plants and trees. Of trees growing in Finnish forests, alder usually does not turn yellow at all during the autumn, aspen can be either yellow or red, maple is orange-red, rowan is usually the most red of our woody plants and birch is the most yellow. Although autumn is usually perceived only in deciduous trees, it is also less visible in our conifers. It is difficult to see the coniferous spruce brown at all, but the pine instead turns partially yellow and sheds some of its needles at the same time as the deciduous trees.

Maaruska’s most colorful plants are dwarf birch, blueberry, clover and black bearberry. The concept of maaruska is much less used than the general concept of ruska, and in Finland when talking about ruska, attention is paid almost exclusively to the one noticed in trees, which is perceived as more impressive and easier to notice. However, while hiking or just spending time in the forests of Lapland, it is definitely worth paying attention to the ground level also.

Fall foliage season things to do in Ranua

As I said earlier, autumn time in Lapland is definitely the best time of the year for hiking and camping, for example, and one of the best times for the northern lights is usually the autumn season, when nights are perhaps the darkest, but temperatures are usually not as cold as winter.

In our previous blog posts, you will find information about Ranua’s hiking trails and camping sites and the Northern Lights, for example. You can find out more about Ranua’s autumn tips in our Autumn Holiday in Ranua blog post.